We’re another week closer and in my excitement to get the post out last week, I omitted a few facts. I was also asked by a few people to fill in my own history with this truly fun event!

First, here’s the omitted fact: It’s 10 clams… or I mean… bucks, to get in. $10. For some serious yummy-ness and anything-but-serious fun!

Why: To build our Camano Island community, listen to great music, get inspired by art, win prizes and eat some darn good Camano Island-inspired chili and chowder!

Say Hi To Me, "Janna White" at the Camano Island Chili Chowder Cook Off!

I really love this event and I’ve been more involved in the past, including making the announcements and organizing the whole crazy raffle production. Heck, I even donated the raffle spinner to the Chamber of Commerce to use in events such as this.

This year I’m stepping back just a little bit, I’m going to spend some more time eating chili & chowder! I am going to turn over the microphone and enjoy the festivities.

But I will still be helping out, I’ll be following in the role of celebrity Vanna White — being seen and not heard (no easy task for me 🙂 I’ll be having fun holding the raffle prizes up! So make sure you look for me, I’ll be up there — just call me “Janna White” from now on!

Click here to vote for your favorite – chili or chowder – and see what other will be digging into at the Camano Island Chili Chowder Cook Off! 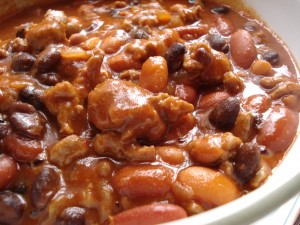 One of Camano Island’s most popular events is just around the corner!

Come out and join in the festivities, eat some amazing chili and chowder — Camano Island style — and vote for your favorite!

There will be live music, a raffle, and art auction to follow.

This is a great event, so much fun every year and I hope you can all come out for this fun event.

Come join us at the Camano Island Senior & Community Center, 606 Arrowhead Rd. If it’s sunny well that’s great; if not well then we have the warm hospitality of the Camano Center and lots of chili and chowder to keep us toasty!

To help us all prepare for the Camano Island Chili Chowder Cook Off next month, here’s a quick history of what we’ll be enjoying:

Although it is commonly held that chili originated from Mexico, historians have confirmed that this is not the case. Mexico has deep traditions, dating back hundreds and even thousands of years. If chili came from Mexico, it would still be there! With the exception of a few places that cater to tourists, there really is no chili found in Mexico. Instead of Mexico, Spain is often credited with its creation by popular legend and story.

Chili powder, on the other hand, is a very hot topic! There are a number of people who take credit for creating chili powder, many of them from Texas. In fact, one of the main sources of this story supporting the Camano Island Chili Chowder Cook Off and History of Chili and Chowder says they all were!

For chowder, the Camano Island Chili Chowder Cook Off heats up quite well also in this “History of Chowder” article on what’scookingamerica.net. France gets the nod this time — and decidedly so — for the creation of chowder. Technically, chowder is anything cooked in a “calderia” which is latin and basically means cauldron. The original chowders were likely made of fish, vegetables, anything that could be thrown together. Sailors often ate chowder with biscuits, which have been replaced with crackers these days.

In one sense, the Camano Island Chili Chowder Cook Off celebrates our country’s early beginnings as the United States served as the ‘calderia’ for the world and people from all walks of life came together to partake of the new world’s bounty. Let’s all join together again as this fun, festive and tasty annual event serves up piping hot stews of pure yummy-ness!